InfoPath is Microsoft’s software application that allows users to design, distribute, fill, and submit electronic forms that contain structured data. Till 2015, InfoPath forms were heavily used by most organizations, especially in SharePoint on-premises environment. But, with the involvement of cloud, InfoPath becomes out-dated, and even Microsoft indicated this by discontinuing its services in 2014. However, there is a better alternative available to InfoPath – PowerApps!

So, here we will discuss what the issues with InfoPath are? What is PowerApps? Key advantages of PowerApps, and is PowerApps replacing InfoPath Forms?

There were many reasons behind the discontinuity of InfoPath. Here we have tried to highlight some of them.

But, don’t worry! You can still access all the features of InfoPath Forms with PowerApps. Let’s know a bit about PowerApps.

PowerApps is part of the Office 365 ecosystem that allows users to create business apps quickly without writing any code. These apps can run on almost every device and browser. Here are some other benefits of PowerApps:

1. Apps created by PowerApps can easily be deployed to Dynamics 365, SharePoint, Teams,Power BI, Web or any mobile device2. PowerApps enable power users (non-technical users) to create apps quickly as it doesn’trequire any coding or visual studio3. PowerApps almost (Not fully) replaced InfoPath and Access forms4. Users can create simple apps directly from their browser via – https://web.powerapps.com as shown below:

5. The drag-drop UI of PowerApps enables users to add different controls, images, videos,forms, etc.6. There are many OOB templates available to get started, such as: 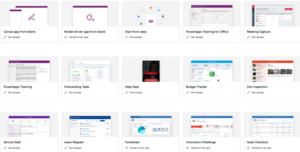 Some key benefits that make PowerApps better than InfoPath Forms are:

1. Working with different data sources in InfoPath forms is a bit complex as developers needto check the code behind the option mostly. However, working with PowerApps is easier because it works with multiple data sources and service connections in one app.2. PowerApps supports more than 200 connectors.3. With PowerApps, users can connect with third-party services as well, such as Dropbox,Google, Salesforce, Slack, Twitter, Facebook, YouTube, GitHub, etc.Now, the primary concern of most users is – how they can access PowerApps?

How to Avail PowerApps?

Well, PowerApps is not free to use. As it is a part of O365, so it is only available with Office 365 subscription.

With the above points, we can say that PowerApps is more powerful than InfoPath. Though it doesn’t provide all the features of InfoPath, it is still faster than InfoPath. However, replacing InfoPath with PowerApps entirely depends on organizations. If businesses start adopting PowerApps for their every need, then InfoPath will soon be replaced by it.